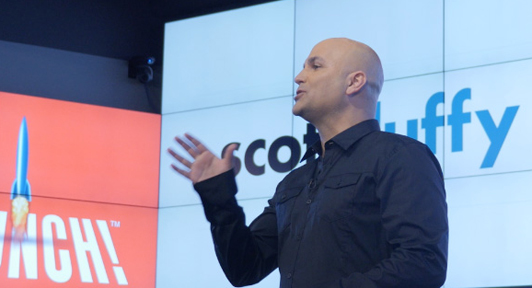 One of the most popular entrepreneurship and business keynote speakers in the world, Scott Duffy has had the rare opportunity to learn from some of the most brilliant innovators and business professionals working today. He started his career working with Tony Robbins, has partnered with Sir Richard Branson, and has helped launch CBSsports.com, NBC Internet,… more --> Barry Moltz gets businesses growing again by unlocking their long forgotten potential. Thanks to decades of entrepreneurial experience in his own business ventures as well as consulting countless other entrepreneurs, Barry has discovered the formula to get business owners "unstuck" and marching forward. He applies simple, strategic steps to facilitate change for entrepreneurs, and gets… more --> Social entrepreneur Mallory Brown represents a new generation of philanthropy. At age 24, she founded World Clothes Line, an online business that donates one article of clothing for every article sold. Mallory and her numerous success stories are a living testimony that we really can "do well by doing good." As a speaker she takes… more -->

Creating a Hope-Driven Culture with Libby Gill
By Libby Gill

After nearly twenty years in senior leadership roles in communications at media giants Universal, Sony and Turner Broadcasting, Libby is now CEO of executive coaching and consulting firm Libby Gill & Company. A sought-after international speaker, she guides established and emerging leaders to increase passion and productivity in their organizations. I find that organizations often… more --> Perspectives on Leadership and Entrepreneurship from Ram Charan
By Ram Charan

World-renowned consultant, author and speaker Ram Charan has made an extraordinary life journey, from working in the family shoe shop in a small town in northern India to an engineering degree then a job in Australian mines followed by an MBA and doctorate from Harvard Business School, from where he graduated with high distinction. He… more --> Kevin Harrington is a self-made millionaire and successful entrepreneur who is better known as one of the "sharks" on the popular TV show Shark Tank. He is recognized as the inventor of the infomercial and is the author of Act Now: How I Turn Ideas into Million-Dollar Products and Pitch Advice from the Man Who… more --> People want to work with those they like and with those they consider friends. SPEAKING.COM: How can leaders foster organizational transformation through behavior changes? FERRAZZI: It’s about trust and showing your team how they individually benefit from the change. Be the first to exhibit and model the change you want to see. Let them know… more --> Key Advice for Entrepreneurs from Robin Crow
By Robin Crow

Robin Crow has forged a remarkable career on his journey from RCA recording artist to successful entrepreneur, and has built several world-class businesses from scratch. His company Dark Horse Recording, a four-studio complex and resort has set the gold standard for customer service and excellence in the recording industry. It is home to Faith Hill,… more -->

Robert Richman is a culture strategist and was the co-creator of Zappos Insights, an innovative program focused on educating companies on the secrets behind Zappos’ amazing employee culture. The big challenge is to develop a culture that is strongly aligned but also has the freedom to be autonomous. SPEAKING.COM: What are some of the main… more --> Affordable Strategies for Getting More From Every Meeting
By Scott Steinberg

From event programming to setup and transportation, meeting professionals have no shortage of concerns that constantly demand their attention. With so much effort routinely poured into crafting compelling programs and delivering powerful experiences for attendees, it’s therefore all-too-easy to overlook opportunities to engage audiences both ahead of and beyond actual day-of activities. Happily, with each… more -->